Nati and the Pumpkin Bumpkin 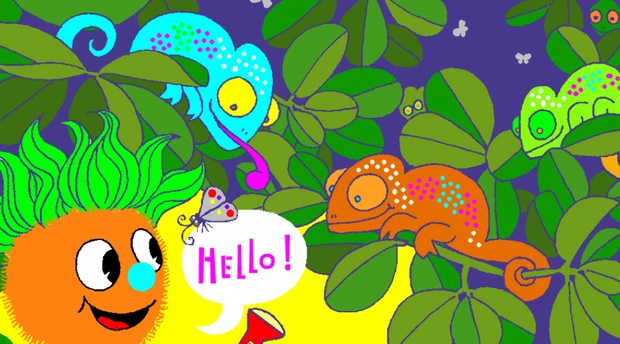 A story for everyone (I hope little kids'll enjoy it especially).

And Gramps, of course, loves giving them, because Nati gets so excited about getting them. Last week when he took the dogs for a walk, he picked a stalk of flowers from a camel-foot tree (those purple flowers, the ones with the beautiful smell), and brought it back to his Favourite Little Ou, and Nati said: “Thanks! These are kief!” and ran inside to show them to Mom and Dad.

Some of Gramps’ presents (the toys) are fun; some (the books) are serious; and some (the socks) are just plain strange - but yesterday’s present was funny.

“What’s that?” said Nati, when Gramps held out a squishy, orange, bally-kind-of-a-thing with green spiky hair and smiley, rattly eyes.

“It’s a .... thing,” said Gramps, who hadn’t been sure what it was even when he’d seen it at the shop, although he’d been quite  sure that Nati would Find A Use for it.

Dad recognised it immediately, though: “It’s a Pumpkin Bumpkin,” he said, nodding his head. “Look,” and he took it from Nate and started to squeeze and push it into Various Shapes. “You can make a face with it,” he said, and gave it back.

Dad told Gramps about the Chameleons that lived in the old fig tree. “You don’t always see them,” he said. “Just on lucky nights.”

So they took a torch and Nati took his bicycle, and they walked down the road together.

But it was a lucky night - because all the chameleons in the fig tree were out and hunting, each one standing as still as he could till the very last minute, then shooting his tongue out - quick as a laser - to zap his supper.

Nati took the Pumpkin Bumpkin from Dad - who’d been carrying it so that Nati could ride his bike - and held it out to show it to the Biggest Chameleon In The Tree.

“They change colour,” he said. “So this one’s going to go orange.”

Dad just smiled, but Nati saw it. It was changing colour. “They’re talking to each other!” he said. “Hello, Chameleon.”

“Will you change colour for me?” said Nati.

“OK,” said the Chameleon. “But you’ll have to take a photo of me so that everyone can see that I did it!”

And that’s exactly what Nati did: he held his fingers in a square before his left eye, and went “xtx!” with his tongue, and took the photo that I’ve put up there at the top of the page.

And if you look really hard, you’ll see (although most of the adults won’t) that the Biggest Chameleon Of All had indeed - as chameleons do - turned orange.