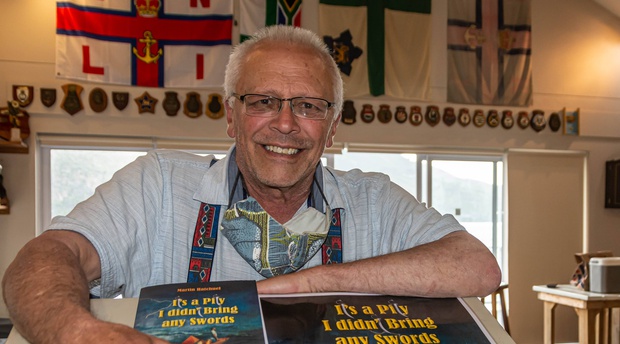 Freelance writer & communicator. Sometime horticulturist. Coming from a background in the earth sciences, I’ve developed a powerful ability to translate science and jargon into English for Everyone. Experienced in project management (web sites, print, advertising -- and horticultural). Dreamer-upper and writer of stories.

I qualified in horticulture in Durban before going into the real world to put my hard-won knowledge to good use... as a boat boy in Knysna.

Went on to work in restaurants, at a timeshare resort and, in the very early days, at one of those old-fashioned caravan park/holiday camp places. I then turned to my knowledge of the natural sciences to become a tour guide (the first, mind you, at Featherbed Nature Reserve - which grew to become Knysna’s biggest tourism attraction), a ferryboat skipper and, ultimately, the owner of my own business in the Wilderness National Park: a bird-watching concession called the Kingfisher Ferry.

Then the floods of ’96 came down, the Touw River was silted up, and my boat and I found ourselves up the creek without an, er, creek.

So I started to write.

I entered the fray as the editor of a newspaper called Cape Tourism Update, which  survived for just 21 months. When it closed (in about ’99), I went out as a freelancer, founding one of the country’s earliest blogs (thistourismweek.co.za), and producing feature articles, media releases, advertising copy, commentary, business strategies, textbooks and souvenir books -- and also researching and writing about local economic development.

All of which I have explored -- and continue to explore -- for companies and municipalities largely in the Western Cape. (For example: I served as Mossel Bay Tourism's communications consultant for nine years. It was me who came up with the slogan, ‘Mossel Bay. Do stuff,’ -- which prompted @RealLauraHulme to tweet, ‘Drove past a billboard that said "Mossel Bay. Do Stuff." I haven't been this inspired by a slogan since Nike.’)

More recently, I returned to Featherbed Nature Reserve after the Knysna Fires of 2017 to direct the rehabilitation of the reserve’s Knysna sands fynbos, and while I was there, wrote the children’s novel, ‘It’s a Pity I didn’t Bring any Swords’ (bit.ly/SwordsNovel) - a ghoulishly lekker local adventure in which a boy, his dogs, and his friend the ghost sail out the Knysna Heads to search for the ghost’s lost grandpa, who hasn’t been seen for hundreds of  years.

Literary fiction, too, of course: my first novel, ‘Belthar’s Garden,’ is available from Amazon.

I have experience as a language editor for academic papers, including,

With an interest in the history of my town, I'm the communications consultant for Classic Rail's project to restore the George-Knysna railway line, and thereby return the Outeniqua Choo-Tjoe to service. And I’m also an administrator on the Facebook group, Knysna, back in the days.

The personal stuff? I was born in October ‘58, and I’m the single foster father of two boys (men now, actually), and the grandfather of the world’s most beautiful and talented kid (OK, I’ll admit it: I’m biased).