New interpretive sign for the wreck of the Paquita 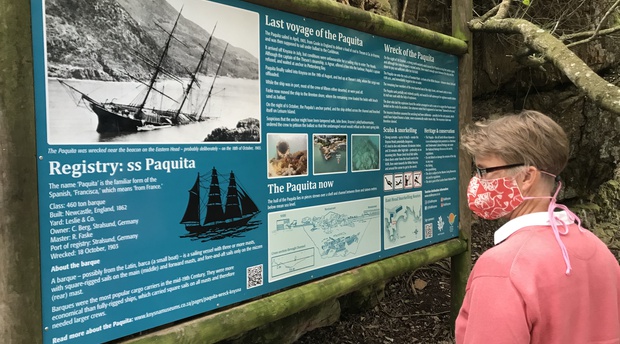 QR code links history in the field (well - in the sea!) to Knysna Museum

In the old days - when tour guides were tour guides, and ghosts were scared - some of us (ahem!) would spin stories about the dangers of the Knysna Heads, and embellish them with wild claims about ‘the most dangerous portal to the sea,’ and ‘the only place in the world where you couldn’t get insurance for your craft.’

Not that we had any reference material for these porkers, of course - just that we subscribed to the idea that you should never let the facts get in the way of a good story.

And one of our favourite stories was the tale of the wreck of the Paquita, which lies tantalisingly close to the shore - on the edge of the shipping channel, just metres west of the White Beacon at the base of the Eastern Head.

Over the years, the steel hull of the wreck became a favourite spot for diving and snorkelling - and, since the story had been told so many times and in so many ways - members of the Scylla Diving Club decided, back in the late 80s or early 90s, to erect an interpretive sign that would set the record straight, provide information about visiting the wreck, and explain its legal status.

The sign - 1.1 metres high, 2.45 metres wide - was erected in the leafy walk-through that leads from the lower restaurant parking area to the White Beacon. And it served the Paquita well for almost 30 years.

New interpretive sign for the wreck of the Paquita

By this year, though (2021) the sign had become both tatty and outdated, and Visit Knysna and the local municipality decided to sponsor a new board - which they contracted Destination Garden Route to produce.

Destination Garden Route worked with Martin Hatchuel (tourismcontent.co.za), who researched and wrote new text for the board, Jo Hugo (design,etc.), who designed it, and Elle Redman (Elle Photo), who provided new photos to accompany the iconic and historic image of the Paquita as she looked lying on the rocks back in 1903 - after she was wrecked, but before she was finally sunk.

While the new sign provides an overview of the Paquita as she was and is, space on the board is of course limited - so the whole links via a QR code to a dedicated page on the town’s museums web site (knysnamuseums.co.za), where the story is told in full, accompanied by even more historic images.

Piet Otto's sketch of the wreck of the Paquita

Both the old and the new Paquita signboards carry diagrammes of the Paquita as she looks today. According to Mike Elliot - station commander of the NSRI's Station 12 Knysna at the time the original board was erected - this diagramme was drawn by  Piet Otto (a member of the Scylla diving club), who "spent months diving the wreck using an aluminum swimming pool rod as a 'ruler' to ensure the dimensions were accurate."

Now  when you're visiting The Heads, you can scan the code with a smartphone, and it’ll direct you to the link you’re looking for: ‘The Paquita: from deliberate wreck to diver’s paradise - The story of Knysna’s most famous shipwreck.’

The value to Knysna goes beyond just telling a story in the field: thanks to the QR code and the web (the history to digital interface!), the authentic tale of the Paquita is now also available to the world.

Want to tell your stories to the world - in print, on line, by video, or through innovative ideas like you’ve read about here? Contact Martin Hatchuel today.