A shipwreck that made a Knysna adventure 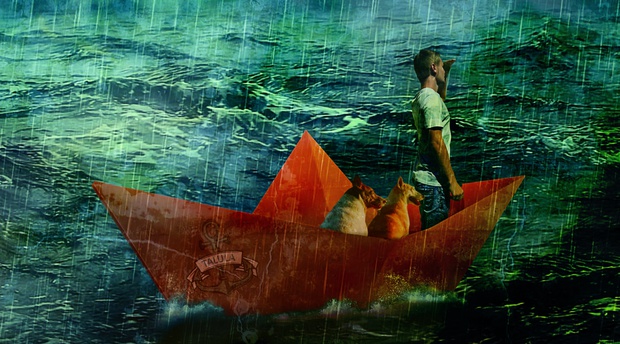 How did the wreck of the Ville Pierre on Noetzie Beach find its way into Martin Hatchuel's children's novel, It's a pity I didn't bring any swords?

Knysna’s maritime history stems (awful pun!) from the presence of the enormous indigenous forests of the Garden Route that were so attractive to the earliest settlers.

Cape Town needed timber, and Knysna had it - but the roads between the two in the early 1800s! - pretty impassable, really.

Also, there aren’t many natural harbours along the Southern Cape coast, although the Knysna Lagoon is the exception.

Problem with the Lagoon, though, is The Heads: the narrow (300 metre wide) entrance to the sea forms a treacherous portal indeed - especially when you consider that the navigable channel is less than 90 metres wide, and that it lies on the Western side of the mouth - which seems counter-intuitive when you look at it as you approach from the seaward side.

And this is why the first ship that attempted to cross the bar (sailor-speak for coming in through The Heads) hit a rock on the eastern side, and sank onto the sandbank just inside the river mouth. This was back in 1817, you understand: no GPS or depth sounders in those days...

Undeterred, the colony’s naval commissioner, Jahleel Brenton - who wanted to access that timber, and who also wanted to encourage families to settle in Knysna “to make experiments in the cultivation of hemp” - sent a second ship to salvage the remains of the first. This was the HMS Podargus, which sailed safely through the narrows, blazing a path for Captain Robert Wauchope (who surveyed the lagoon on HMS Eurydice), and for the arrival of the first pilot at The Heads, John Gough (who took up his post in 1818, and was fired for dereliction of duty only 18 months later).

John Benn and The Phoenix

From then on the port of Knysna progressed in fits and starts - but always exporting timber to the wood-hungry cities of the Cape Colony.

Many men (it was always men) held the post of pilot and harbourmaster in the years until the harbour was finally closed in 1954 - but none more famously than John Benn II, who ruled the roost from 1877 to 1912.

One of Benn’s most remarkable moments on the job happened in April, 1881, when he and his men found an abandoned three-masted schooner at the mouth of the Noetzie River (east of The Heads), its masts and rigging bleached white from the sun.

With no valuables or signs of life on board, it had clearly been adrift for a long, long time.

Benn identified it as the Phoenix - which had previously been registered as the Ville Pierre, out of Point Pierre on the Island of Réunion.

The search party did find two written records on board: a scrap of paper dated 1880, and the ship’s cargo log,  which showed that it had carried a load of guano back in 1876.

With no further clues available, the mystery of the wreck remained unsolved.

And the Phoenix? Well, she was attached by the government's customs officer, and auctioned off for £15.

It's a pity I didn't bring any swords

So how does such a mystery fit into Martin Hatchuel’s ghoulishly lekker local children’s adventure, It’s a pity I didn’t bring any swords?

Well - because a ghost appeared on board on the day of John Benn’s inspection. And if you want to know how THAT fits into the picture, you’ll have to read the book.