The White Lady at the Garden of Eden 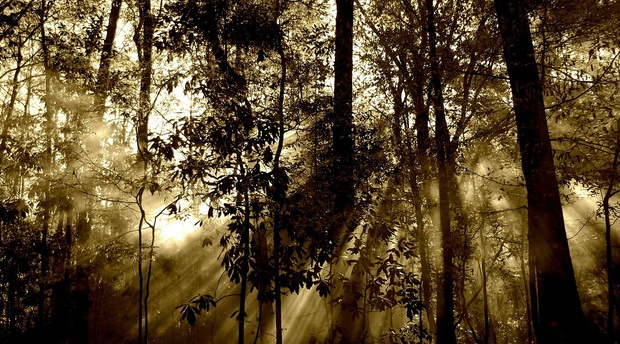 Why hasn’t the local press reported on the White Lady of the Garden of Eden since July, 1992? She’d been seen before, and they wrote about her then. But why hasn’t she been seen since?

A short story by Martin Hatchuel

The Frontier Wars of the late eighteenth and early nineteenth centuries were fought between the British settlers on the one hand, and the indigenous Xhosa people of the Eastern Cape and the eastern part of the Western Cape on the other. By all accounts long and bitter, they left no corner of the Colony untouched - not even the remote region around the sleepy Knysna Lagoon.

The population of the area being so small, the locals decided to declare a sanctuary on the farm Stofpad, near Wittedrif, north of the present-day Garden of Eden. Stofpad was situated at a strategic point on the road to the interior - the road we now call Prince Alfred’s Pass. The settlers agreed that if ever any of them were attacked, they’d all move their families, their servants, and their livestock to Stofpad, where they would defend themselves together.

They didn’t have to wait very long: the Xhosa attacked the farm Melkhoutkraal on the banks of the Knysna Lagoon early in 1802. (George Rex, the founder of Knysna, would buy this same property and settle there almost two years later.)

Knowing what to expect, the settlers had begged the colonial government on many occasions for help to defend themselves - but the government refused them every time.

The settlers, of course, were angry: as they saw it, the colonial government consistently refused to defend the very people it expected to look after its interests in Outeniqualand.

They’d had enough. The call went out to come to Stofpad, and the entire settler population set out - in their ox wagons, on horseback, even on foot.

But they were an independent-minded lot, these settlers, and they struggled to agree on anything. So, instead of standing together as they’d planned to do, they split into factions, and, instead of vigorously defending themselves, they moved away. Separately, of course.

One group chose to ride westwards towards Mossel Bay, where they hoped to find a ship to take them to Cape Town.

Travelling on rough tracks in the forests, this party was ambushed by the Xhosa at Die Poort - today, the Garden of Eden. Four of them were killed in the battle, and one couple escaped and returned to Stofpad. But the rest - all of them women and children - the Xhosas took as hostages.

The Xhosas delivered their ransom demand to Stofpad on the following day, but, suspecting another trap, the farmers followed them to their hide-out near Fisanthoek, north-west of the Garden of Eden. Despite the fact that they found no hostages there - they’d already been moved to Gansvlei, from where they would later be released - the settlers attacked, killing a total of eleven people.

These events finally forced the government’s hand. Not that it did very much: it simply sent a small stock of ammunition to Johan Frederick Meeding, its representative in Plettenberg Bay.

But Meeding had had enough, too. He wrote to his superiors that he wanted to return with his family to Cape Town.

The Lieutenant-Governor was shocked! He strongly disapproved of Meeding’s request. It would, he said in his letter of reply, “set an example which would certainly be followed by others and the country most probably deserted.”

Despite the governor’s sternly-worded letter, a number of families did leave the district - but the Battle of Die Poort marked the end of the Frontier Wars in this part of the county. Life would take a more peaceful course for the people who stayed.

For everyone except, it seems, one poor soul.

Let’s have a look at that press cutting of July 1992 once again. A Cape Town family on holiday in the area, it says, was driving from Plettenberg Bay to Knysna when suddenly, as they passed through the Garden of Eden, their three year-old daughter began to cry.

“Mommy! Take this lady away!”

“What lady, sweetheart?” said her mother.

“The White Lady, take her away!”

The child screamed horribly, and backed into the corner of the car, trying to get as much space as she could between herself and the empty passenger seat next to her.

Her father drove on, and the child did calm down eventually - but only after they’d emerged from the eerie forests that surround the road in that part of the country even today.

Concerned, the parents made enquiries in Knysna. Had anyone else seen a White Lady in those parts?

Yes, people said. They had: on at least two different occasions. She appeared once in the car of a local accountant who drove that route regularly, and once again to a family from Bellville who were visiting the Garden Route.

But she hasn’t been seen since.

One more thing: up to the time the White Lady appeared to the child, no one had ever been killed in any motor vehicle accident on that part of the road. So it’s interesting to ask: does the White Lady really exist? And if she does - or did - and given the tragedy that might have happened to her, is she perhaps the ghost of one of the people who died here in 1802?

And if she hasn’t been seen in nearly thirty years - has she finally found the rest she was looking for?

This work is licensed under a Creative Commons Attribution-NonCommercial-NoDerivatives 4.0 International License.