Gareth Patterson’s Beyond the Secret Elephants

There’s nothing so delicious as a quiet weekend in Knysna with a book you can’t put down - except perhaps the questions it raises.

Gareth Patterson wanted to solve one of Knysna’s most common mysteries in his 2009 book, ‘The Secret Elephants - The Rediscovery of the World's Most Southerly Elephants.’

How many of them were there in the Knysna Forests?

The official party line was: just one - an old matriarch, wandering lonely and forlorn in the leafy, lemony light of the evergreen jungle that surrounds the town. (It’s a line that hasn’t changed; If anything, local pundits have become ever more strident in their insistence that that’s that.)

But Gareth knew otherwise. He’d spent seven self-funded years looking for them - walking quietly in the forest and its neighbouring fynbos for hours almost every day, covering thousands and thousands of kilometres - and although he’d enjoyed only a few, brief encounters with them, he had managed to collect several hundred DNA samples from them: he extracted this DNA from their dung - which he also measured for size in order to estimate the ages of the depositors.

He had these samples analysed by conservation geneticist Prof. Lori Eggert, the Director of Graduate Studies in the Division of Biological Sciences at the University of Missouri, who had developed a method of genetic censusing specifically for the study of African and Asian elephant populations.

The Knysna forests, she found, contained at least five individual females - and field observations by Gareth and others (spoor, actual encounters, etc.) indicated the presence of at least two males, too.

Beyond the Secret Elephants

The Secret Elephants was a cracker of a read, and I still can’t see how anyone could argue with its conclusions. So I plunged right in when ‘Beyond the Secret Elephants’ landed on my desk last week - hoping (because, as usual, I’d been in too much of a hurry to read the advance notices) that it would reveal even more conclusive evidence of our favourite forest phantoms, and (more hopes), that it would tell us that we had even more of them living in our back yard.

Instead, I learned (not enough!) about an even more intriguing mystery: Otang.

Otang is the local name for a relict hominoid - a kind of human relative like the Yeti in the Himalayas or Bigfoot in North America - living in the Knysna forests.

Now don’t stop reading this review just because you don’t believe in the existence of relic hominoids - and if you need motivation to carry on, remember this: “The greatest scientific discovery was the discovery of ignorance. Once humans realised how little they knew about the world, they suddenly had a very good reason to seek new knowledge, which opened up the scientific road to progress.” (Yuval Noah Harari - ‘Homo Deus: A Brief History of Tomorrow’)

We don’t want to be ignorant.

Gareth and the people he cites in his book have seen Otangs - usually, but not always, quite briefly - and one of the things that intrigued me is that every one of them has exhibited one, common set of reactions to the experience: shock, followed by a deep reluctance to tell anyone about it.

“Because I thought you wouldn’t believe me.” (Which could just as well have been the title of the book.)

This is a terrible indictment on society. Are we that narrow-minded that we can’t open ourselves up to possibilities as great as the fact that we might be living next door to a distant (or not so distant) relative?

You have to ask how far we’ve come from the time when the Roman Catholic Inquisition put Galileo on trial - and condemned him - for supporting the principle of heliocentrism (the Earth and planets revolve around the Sun) rather than its own, human-decreed vision of a stationary earth at the centre of a human-decreed, limited universe.

But more than an indictment on society, it’s a hurdle in the way of scientific progress. Willful ignorance always is.

Given that, as palaeoanthropologist John Hawks says, “Africa was [once] full of hominin populations” - and also that, “What is weird about humans is not that we had genetic exchanges with past people, what is weird is that past people are not here today” (quoted on pages 117 and 138 of the book) - surely we want to know?

If Gareth Patterson knows anything, he knows how to tell stories, and this book is filled with them - intriguing, sometimes quite-difficult-to-credit, and occasionally even funny.

This is important. Stories are the basis on which we build our societies, and they help us interpret and understand the world around us. The great ones leave us thinking, and even sometimes questioning the things we think we know - which is fundamental to increasing our knowledge of the world, and thus, ultimately, to our survival.

And so I suppose it’s quite satisfying that Gareth’s book doesn’t give us all the answers - I was left wondering, for example, why the only evidence of Otang’s existence comes from reports of sightings, and from casts of footprints (although Gareth does report seeing at least one handprint - but it was raining that day, and it disappeared quickly into the mud).

Where, for example, is the scat (droppings)? Doesn’t the Otang leave any other signs - like damaged plant material - that an experienced tracker could follow?

But most importantly, it leaves us asking two more fundamental things: are we really doing enough to protect the forests in which these wonderful creatures may be living - and which, ultimately, protect our own existence?

And are we really anywhere near a full understanding of this strange and marvellous world of ours?

p.s. If you live in Knysna, aren't you delighted to know that the forests have even more secrets than you thought?

p.p.s: You can walk the forests with Gareth on one of his 'Secret Elephants Forest Experiences.' Details on garethpatterson.com 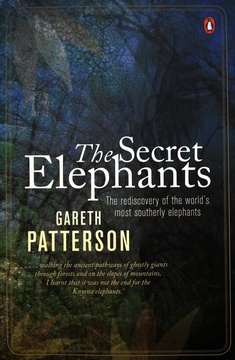 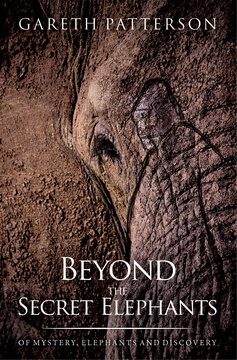